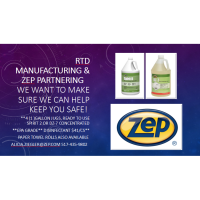 JACKSON, MI – Most products sat on the shelves at RTD Manufacturing Inc. for two months after Michigan’s coronavirus pandemic started.

Unable to do the work it normally does for the aerospace and automotive industries and on inspection equipment, the Jackson machine shop was hurting, Project Manager Irvin Stone said. Then he saw a social media post from another Jackson manufacturer, Technique Inc., saying it had run out of disinfecting wipes.

“It was a glimmer in my mind on April Fool's Day,” he said.

Towl-Wet is a disinfectant dispenser that turns paper towels into disinfectant wipes. RTD Manufacturing, 1150 S. Elm St., created a plexiglass prototype and sent it to Technique Inc. to use. The company is now hoping to sell the product to other businesses.

“One of the big advantages of this is if you can buy disinfecting wipes, they cost about 10 cents each,” Stone said. “You can make these for less than a penny apiece.”

“We would donate more to other first responders if we find out who wants them,” Stone said.

The Jackson YMCA and local libraries have shown an interest as well, he said. For businesses that are reopening and bringing employees back, Stone thinks the dispenser could help enhance sanitizing measures.

There have been approximately 20 Towl-Wet dispensers built to date, and there have been many changes since the prototype, including making the dispenser out of powder-coated steel instead of plexiglass, which has made it sturdier.

“Plexiglass is almost impossible to get now because of the huge demand for guards in front of (store) cashiers and places like that,” Stone said. “We had to rethink how we’re going to do this, so we started making them out of steel.”

Stone hopes to see demand pick up once people learn more about the dispensers.